"I really enjoy your videos, your are by far the best. All I have to do is see a picture of you and I get turned on."

The Making of My Twin 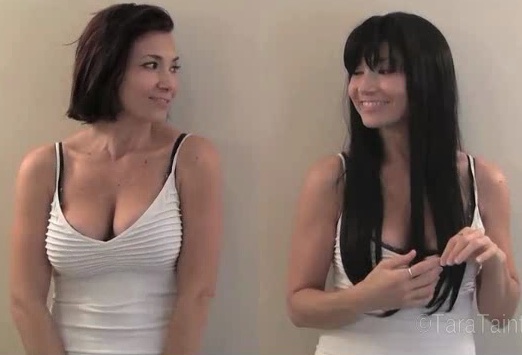 Later today, for the first time, my raven haired twin sister is excitedly making her on-camera debut. Her bubbly personality will dazzle you, and her strong desire to best her sister will make for possibly the most erotic seduction scene I’ve ever filmed. Just as you possibly love Tara Tainton studios videos for the most, you will be the lucky one, the man introduced to, invited into their bedroom with, and between my sister and I. We have a little competition going, you see. We want you to tell us whom you prefer. Me or my sultry sister. It’s your choice.

I may not have a true biological twin, but through the magic of “movies” and the erotic desire of myself and my massive worldwide fan base combined, a Tara twin is born. The idea was born in the mind of one of my first and most faithful fans, one creative mind that’s envisioned me as one fantastic character after another, inspiring me to meet the challenge of transforming into Poison Ivy (“My Poisonous Lips Seal Batman’s Fate”) or the woman who seduces and destroys superman (“The Epic Seduction and Destruction of Superman”) or the buxom blonde (“Alien Invasion! Sultry Blonde Maiden Is Abducted and Seduced”) or nun (“The Tainton Zone – Episode 3: The Lord Works in Mysterious Ways”) taken advantage of by an alien species. Oh, yes, with my fans, the best fetish video fans in existence, there are no limits to how I will continue to delight you well into the future. Your every fantasy, I can fulfill. Just try me.

So, my beautiful twin sister was born of a simple video request, a suggestion to see me and my supposed “twin” played also by myself, compete for the attentions of a male suitor: you. Performing twice in one video and performing two separate characters in one scene is complicated. Filming takes twice as long, and you never know what turn the whole scenario will take. I couldn’t have conceived of the gorgeous, super sexy result my newest video scene would conceive.

I started the first scene of “Which Tara Twin Would You Choose?” playing myself. When I donned the sexy long hair of my twin, I was surprised with the completely different personality that just came out. That’s how most of my video scenes form and result in: complete, delightful, sexy surprises. I never know what I’m going to say and sometimes, not even specifically what I’m going to do on camera. A video request from a fan may be a couple lines describing a scenario or characters or a long, detailed scenario filled with bits of dialogue and all the highlights to include. Yet, once the camera is recording, I become a new person, a woman (and sometimes, a man) with personality based on a single facet of my own. I ad lib everything. Every bit of dialogue comes, moment to moment, out of my own imagination.

A new voice, attitude, and desires just “came out” of my newly created twin sister on camera. We conversed with each other on screen in one-sided discourse… until the editing process. For the first time in my career, and with the help of a motivated video editor, I recorded voice overs for my own video… and ad libbed every word and snippet of conversation my twin or myself spoke off camera as well.

Oh, and also for the first time on camera, I’m kissing another woman. Who best to first exercise my bicurious tendencies with than myself??

Your thoughts on “The Making of My Twin”

Right now I only bow down and worship Goddess Tara as my god. But, the twin is very hot and sexy, I might be bowing down to the both of you, if this is possible. 2 gods? hmm. You can choose for me, Im your slave.

I have surrendered to goddess Tara as my new religion, and god.

Just saw one video of yours online, it was so well done with such thought and genuine-ness, it had me rushing to google to find out who the girl was!

At first finding your site I thought I found the wrong girl as the one I saw was blond and had long hair (and a younger you?) but started looking around and spending hours getting to know about you.

I guess you\’ve been told countless times before but I need to say it: There really isn\’t anyone quite like you. I\’ve read quite a few blogs on sex and sexuality by women and girls with their own sites but no one even seemed \”real\” like you do. The perspective you offer is clearly your own and there is nothing better than that.

I can\’t quite put in words what a brilliant \’discovery\’ you have been. Good luck for whatever life brings. Have a great time!

Now, that is an amazing idea, Anon! Twin goddesses… two women, almost the same, to bow down to. I\’m getting turned on already!
Anon #2, don\’t forget to tell me which video you just enjoyed… I\’m dying to know! 😉 I love that you\’ve discovered my site and genuine personality. I\’m so glad you see and enjoy that in every video! Keep watching… and I hope your\’e in my inbox and sending your own requests my way! xoxo!

two Taras are better than one. 🙂

i haven\’t seen Tara here on Her web-site in a bit of a while . . . and She looks sexier and more alluring and enticing than ever . . . even in stereo-scope. 🙂

oooh… anon… I better get that taboo scenario coming to you soon! 😉

Home > Tara's Blog > The Making of My Twin