"I must say I'm impressed with your dedication and openness towards your audience, something like that has sadly become very rare on the internet these days." 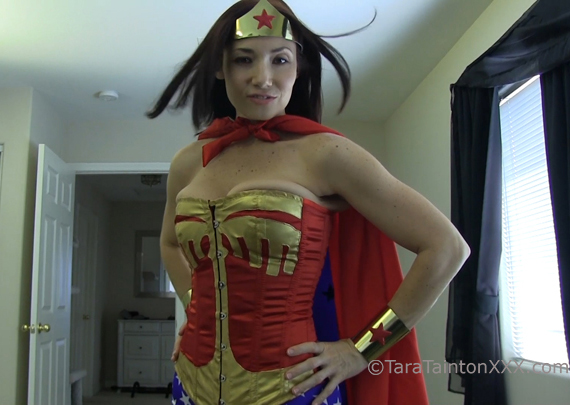 They’re spreading in popularity faster than lightening in the fetish realm: uber sexy, ultra powerful heroines of the super variety. Entire forums are devoted to them, fans rave about them and clamor for featured material, entire fetish categories on your favorite clips sites are designated for them, and entire production studios are churning out scenes.

And when my own fans began to draw my attention to the genre, I started feeling their own excitement, especially when learning that men really do love – and are aroused by – powerful women. They don’t mind us musclebound, they may even prefer it. They like us holding our own (along with a few superpowers), wielding our strength over them, and exercising justice as we see fit. Of course, the costumes themselves are enough to drive anyone wild. And when your favorite heroines, comic book characters, and television and film femme fatale roles come to life in a sexual fashion filled with fetish play, you’re definitely taking note. And so am I.

Thanks to my fans themselves (as always!), I ventured into the superheroine fetish genre very recently. And I’m definitely having a damn good time. Who knew I had it in me? Well, you all did! And I’m receiving more superheroine and supervillainess video requests by the week. Yes, I’ve taken note, keeping an eye on my request queue and on your influx of emails, all making it very apparent that I need to create a regular slot for superheroine stories and scenes in my video catalog for all of you. It is my pleasure! And when I first donned that superheroine costume… well, I definitely felt magical!

My first venture into super-dom was with “Your Super Aunt Astonishes You with the Fulfillment of All Your Fantasies” where the viewer, having a fetish for strong, powerful women, finds his aunt herself is a superheroine, costume and all. My second superheroine scene was “Mousy Girl’s Biggest Dream Comes True when She Turns Superheroine” featuring a long, and even awkward, transformation process into a buxom, muscly babe. It doesn’t get any more fun than that! And you love these scenes (the second was my bestselling scene of all in March!)… which led me to my most recent: “Timid Replacement Secretary Discovers the Tools for a Powerful New Identity”. Ah, they just keep getting better!

Keep the requests coming in, and I’ll keep the adventures coming for a long time to come. I’m now armed with my first custom-fitted costume: a nearly exact replica of the traditional Wonder Woman outfit from the television series starring Lynda Carter. (By the way… did you know that when you enter “nipple lasso” into Amazon.com, photos of Lynda Carter herself appear? If that’s not a testament to the sex appeal of superheroines, I don’t know what is!) I’ll be sure to thank my costume designer for you. There are also Superheroines and SuperVillainesses categories now in my super sexy subscription service. Be sure you hear of my new cosplay scenes first!

Want to delve into the superheroine fun all the deeper? Then, come follow me into the SuperWomenMania forum where we’re all showing off sexy photos, swapping super stories, and my newest fans are developing new super scenes for me this very moment! See you there…

Your thoughts on “Superheroine Madness”

I think your fans would love that you continue with this character – such a hit!!! Extremely sexy video. Love the dialogue as well.

It would be great if you demonstrated super breath, heat vision, x-ray vision, flight and more strength scenes in your next clip. You would look great in a sexy mini cape as well.

It would be really cool if your character could instantly arouse people with her heat/seduction vision as well. You would direct your eyes and send out a beam to their private areas.

Your fans would go wild!

Hello, Davey! It\’s so nice to meet you… consider your excellent suggestions in the queue! I\’ll see what I can do about adding to the character\’s powers… and future victims. 🙂 I love your ideas! I had a great time playing the role of a brand new character … and getting all the great feedback from fans. Don\’t hesitate to write in with more suggestions, comments, discussion! 😉 (see my \”video request line\” email to the left) xoo!